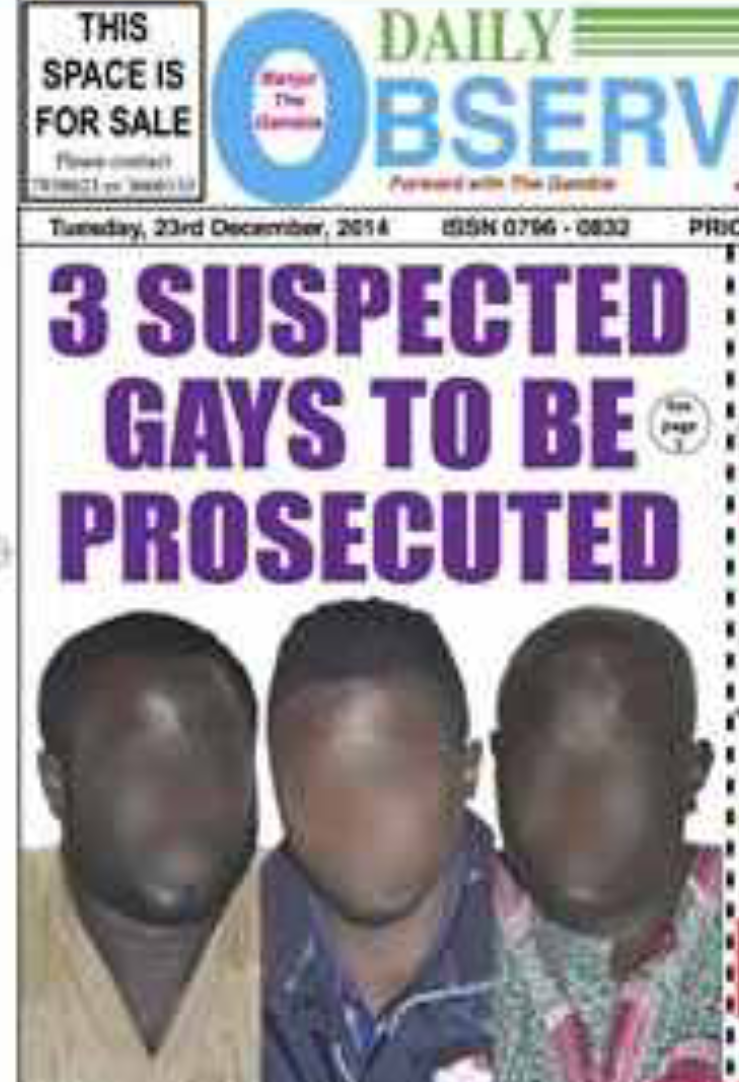 When I saw the headlines on a suspected Gambian gay man allegedly tortured to near death, I was filled with rage, embarrassment and disgust, that the government of the Gambia had finally practicalized their threats to homosexuals. International media reported that he feared he was going to die as he was reportedly seen rushed to the hospital, suffering from internal bleeding.

Now credit must be given to FatuRadio Network for not only breaking the news of the current wave of persecution of gays and lesbians in the small West African nation but having the audacity to break norms and champion advocating for their plight late last year. It was not popular within Gambians but was the right thing to do. Just when the international media and Rights groups were picking on the news, the armed attack on the Presidential Palace on December 30, took a lot of steam out of the momentum.

The Gambia government passed a legislation signed by the president on October 9, 2014, criminalizing homosexuality. It was to target “aggravated homosexuality” and “serial offenders”. Few days after that, without public notification, orders were given and scores of suspected homosexuals were arrested including a minor. They were publicly humiliated by parading them on TV, tried by the media before they had their day in court. These followed the characteristic presidential rage on National TV where the president described the LGBT community as 'vermins' to be exterminated like mosquitoes.

When I first stumbled upon the works of one of the greatest contemporary African American writers by the name James Baldwin, one of the many reasons I adore the man was his tenacity and resilience on his personal journey from growing up as a gay, blackman in Harlem to his migration to France in the 1940s to escape rejection, indignation from his own people because of his sexuality. James Baldwin, a celebrated writer and essayist, and Bayard Rustin, would become incredible, formidable players in the civil rights movement in the United States, fighting and marching along side Martin Luther King for equality and desegregation. Their being gay did not take anything away from their love for humanity and quest for justice.

Tim Cook, the Apple CEO running its many products that we're so elated about, a humanitarian who's doing nothing other than contributing to the advancement of humanity and society through technology, is a modest gay gentleman.

I brought these gentlemen up in this discourse to argue that we should be focusing on the ability of people and the content of their character in embracing or shunning them instead of nitpicking on their sexuality and sexual preferences.

Recently, we've seen an unprecedented rise in the killing of black transgenders in America. Considering how intolerant some people still are against the LGBT community, these could only be hate crimes. Then you go to the Middle East where troubling reports of murdering and severely hurting gays are on the rise. To Africa where majority of the countries are criminalizing sodomy and homosexuality. State sponsored persecution in the name of preserving culture and religion.

The Gambia, which modeled her anti-homosexual laws on Uganda, by imposing 7 years to life imprisonment on aggravated homosexuality, do not even have  prevalence of this issue. As a matter of fact, many Gambians believe that it is a political ploy by the government to divert attention from the already awful state of affairs; poor governance to economic hardship, to non issues like homosexuality. To Uganda's credit, rights activists and the international community challenged the laws and the courts annulled the legislation on technicalities in August last year. At least for now, but that does not end the persistent threats of killing and burning gays alive.

Look, I'm a Muslim. And I as man of faith, I'm not one to even entertain the debate in some quarters that religion should be liberalized and adjusted to accommodate generational or societal evolution. I do not think man should choose when and how to change religion to suit his ever unquenchable quests. If we do, religion wouldn't be what it is.

But it's not lost on me neither, why some people do not subscribe to organized religion. Since the beginning of time, man has used religion to justify his actions, especially his wrongs. From the Christian Crusades and Inquisition, to Slavery by both Europeans and Arabs, segregation in America to Apartheid in South Africa, Islamic extremists in Al-Qaeda & ISIS we invoke the name of God and with His scriptures in hand to oppress and subjugate.

Most of the condemnations and resentments against gays and lesbians, are derived from our religious faiths. Both conservative Jews, Christians and Muslims would point to the same Scriptural account of Sodom and Gomorrah in the Bible, and the People of Lut in the Qur'an. We highlight that God annihilate these cities for engaging in homosexual acts but scriptures did tell us that although homosexuality was the most prevalent, there was too much indecency and violent sexual acts including rape and incest. God punishing these cities for their 'unnatural, immoral' acts had primarily become the stem of hate for gays for most people of these  faiths.

However, these religions taught that homosexuality is a sin like murder, adultery, fornication, lying, stealing, etc., except that unlike all the aforementioned which have their punishments prescribed, I do not see where in the Qur'an or Bible did God explicitly prescribed the punishment for homosexuality. I hope my ignorance in theology could be my excuse here. So if all sins are forgivable upon repent, how is it man's responsibility to persecute and take another's life because of their sexual orientation?

If my child were to be gay, what would I do? NOTHING! out of the ordinary that I wouldn't otherwise have done if he were straight. I'd raise him the best I could as a parent and afford and accord him everything I could. When he becomes an adult of his own my role will be reduced to parental advice. I might not be able to walk him down the isle should he want to go into same-sex marriage, but I'm certainty not going to 'beat' or 'pray' the gay out of him nor am I going to banish or disown him. We've gone beyond the days when homosexuality was wrongfully diagnosed as a disease my medical doctors or psychological disorder my psychiatrists.

Just like most, the gay-lesbian position had been an evolving one for me. Overtime, I'd come to realize and accept that I'd respect the rights of others who still have not opened up to them but would fight for their rights against any persecution or violation. I'm not a same-sex marriage advocate but just like a couple of my cousins who were Muslims yet drinking alcohol and falling in the streets to the utter embarrassment of family, and we didn't beat, kill or excommunicate them, I'm not going to be God's apostle to judge my son should he be gay. Like an uncle who committed adultery and had a child by another woman but still comes to family gatherings, I'm not stoning anybody.

Basically, it's never my business to poke a nose in what others do in the privacy of of their homes and certainly not the State's business to regulate our private lives to the extent of legislating who and how we love.

Homosexuality isn't confined to Western, Eastern or African. To the propaganda that the West wanted to export and compel us to accept gay marriages, I've never heard anything farther from the truth. Well certainly not in the Gambia. There was never any time thus far, that gay marriage had been a precondition to any bilateral engagement that we know of. What's been documented was for the Gambian state to respect the rights of all her citizens irrespective of creed, ethnicity, sexual orientation, political and religious leanings. And our government should be ashamed to be reminded of that obligation. Period.

On the debate that same-sex marriage is a threat to family and human existence, well that's a ridiculous presupposition. Homosexuality isn't something that is spell-driven nor is it contagious. It's like believing that only because I live in a society where access to alcohol and guns is easier, I'll be drinking and go on a murder spree. Equally, only because gays are marrying around me wouldn't make me abandon my desire and ability to be in a heterosexual relationship and bear children. So let's get off the political, religious high horses and stop the hate, prejudice and stand up against what's wrong even when that is against what favors us. That's what great men before us did. That's what I'd do for my child if he were to be gay.

After all, I'd rather have a gay son than a straight disrespectful, murderous child like Gambia's President Yaya Jammeh.

Salaam And Peace To The Planet.